Vaccines have become a huge deal these days. No surprise there, Covid-19 is still at large on a global scale and hence people are strongly encouraged to get a shot as it’s currently the only sure way to stop it.

Needless to say, the anti-vax community has been very vocal about it, objecting to vaccines for a number of reasons—they are experimental, their contents are questionable, among other things.

And while everyone’s entitled to their opinions and everyone trusts their own science, the debate on the internet never seems to stop.

So, this mom decided to step away from the chemical and medical side of things and focus on cold, hard numbers and stats, sprinkled with some swear words and righteous passion.

More Info: TikTok
You may have thought you’ll never need math in real life, but it does give you the power to drop some mad knowledge on people, just like this woman did 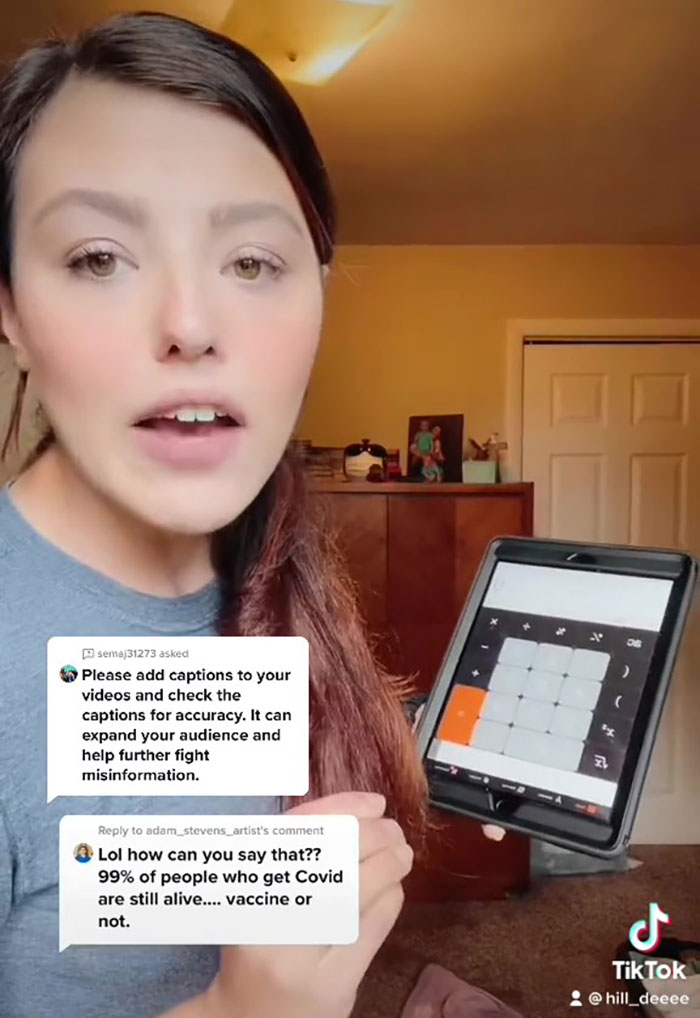 Meet Hillary Dabbs, a mother of two who has recently been going viral for her mathematical explanation as to why it’s a good idea to get vaccinated against the Covid-19 virus. This came as a response to a seemingly covid and/or vaccine denier, who claimed that 99% of people who got Covid are still alive, vaccine or not.

She posted a TikTok video detailing the odds of catching Covid based on the current US statistics on the matter. This includes numbers for the chances of falling ill with and without a vaccine, the likelihood of death, related and unrelated, among other data.
Hillary Dabbs recently responded to a Covid skeptic in the form of a TikTok video with some serious math 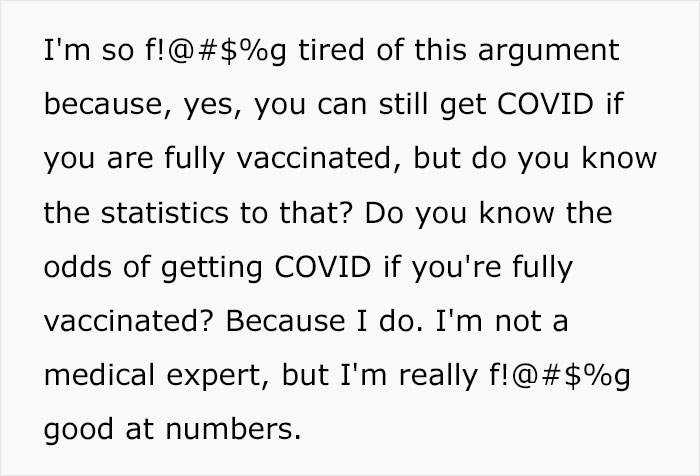 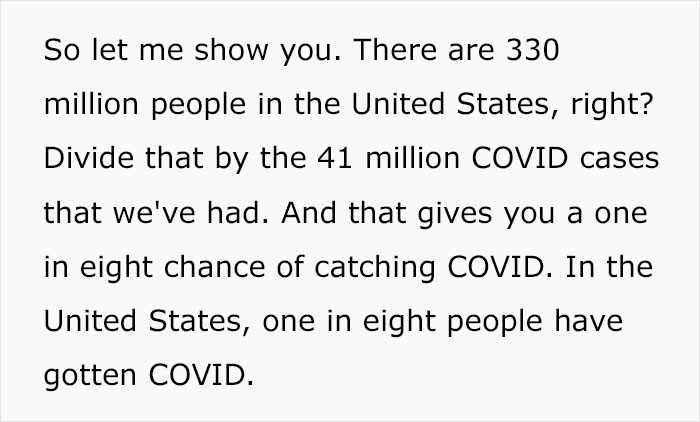 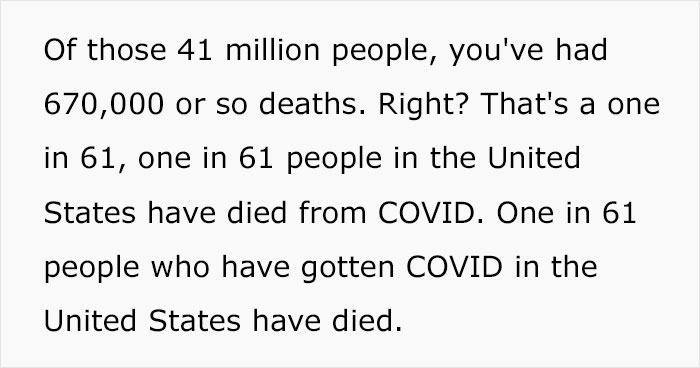 It doesn’t require a math wiz to understand that going from 1 in 61 to going to 1 in 86,500 is a significant change in likelihood of death, all thanks to a vaccination needle or two. 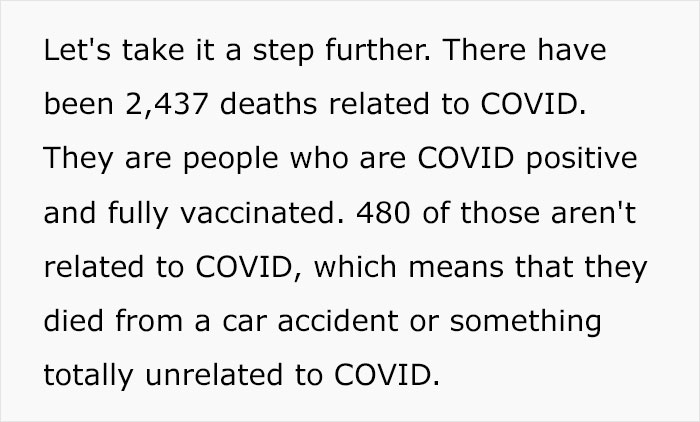 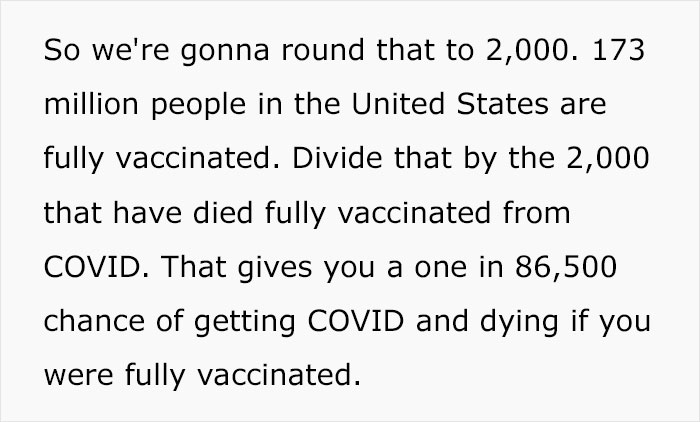 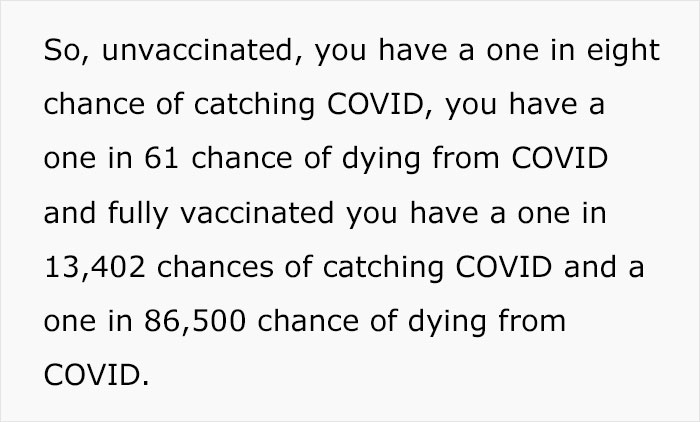 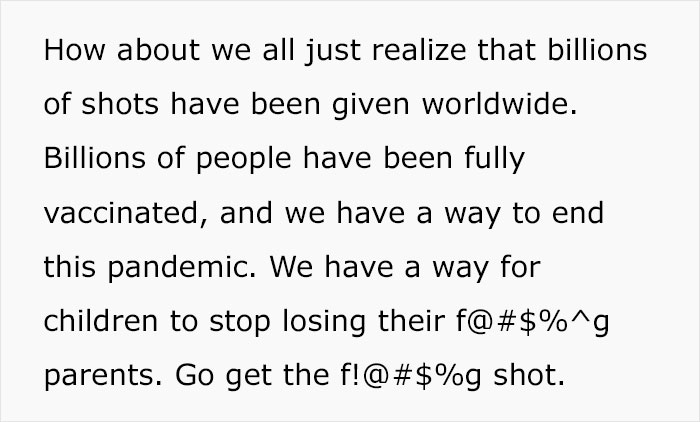 You can check out the full video below

@hill_deeeeAnswer to @semaj31273 As requested.

Apart from that, what also had people listening was the ferocity that Hillary assumed with her message. Viewers can only assume that this was fueled by the fact that she had lost her own dad to Covid because she had previously posted a tribute video to her dad, and had referenced this at the end of the now viral math video by saying “we have a way for children to stop losing their parents.”

Despite this, some commenters said that the message fell on deaf ears as there were a number of comments that were calling shenanigans on Hillary’s message, asking “for sources” and whatnot.
The comment section was a mixed bag of people who were either trolling, or seriously antivax, and who were approving Dabbs’ message

But besides the stereotypical antivax backlash, there were also honest concerns from people who can’t get the vaccine because it will have adverse effects. Hillary did respond to one such comment in a video, saying she understands and isn’t bashing them for it, but still encourages them to consult a physician as, for instance, Covid vaccines are done differently than flu vaccines, so it could still be an option.

Previous 40 Times Designers Forgot Things Need To Be Cleaned When Creating Them, As Shared On This Facebook Group (New Pics)
Next This Restaurant’s Signs Are So Funny, You’d Probably Come Back Just To Read Them (40 New Pics)